The United Stations (UN) estimates that the world population is expected to increase by 2 billion people in the next 30 years – from 7.7 billion today to 9.7 billion in 2050, and possibly peaking at nearly 11 billion around the year 2100.

From electricity to power devices and appliances to fuel to transport and shelter people, such population increases will necessarily lead to heightened demand for energy. If nothing is done to curb current trends, the International Energy Agency (IEA) sees energy demand rising by 1.3% each year to 2040, resulting in “a relentless upward march in energy-related emissions, as well as growing strains on almost all aspects of energy security.”

Indeed, despite a marked rise in the use of renewable energy resources, fossil fuels – namely coal, natural gas, and oil – remain a reasonably inexpensive resource and are expected to remain so for the foreseeable future. This results in hydrocarbon exploration expanding to new regions of the planet, increasing the breadth and scope of potential damage caused to ecosystems, wildlife, and indigenous communities.

In this context, it is essential that exploration operations be conducted as quickly and as efficiently as possible – reducing their short- and long-term environmental footprints.

Developments in the field of onshore seismic data acquisition have made surveying operations faster and more accurate, allowing for such exercises to be undertaken more efficiently and with less environmental impact.

Existing methods of onshore seismic data acquisition call for a labor-intensive process involving large numbers of people moving in a coordinated fashion across terrain to strategically position sensors. And uneven or mountainous terrain, combined with poor weather conditions, can make this extremely dangerous for surveyors.

Total’s Multiphysics Exploration Technology Integrated System (METIS) is an autonomous AI system designed to address the logistical difficulties that make seismic data acquisition difficult. Conceptualized in 2015, the system aims to make data collection a quick and painless process. According to Pierre-Olivier Lys, Geophysics Operations & Technologies Manager at Total, METIS “improves the quality and speed of data acquisition through real-time quality control and processing, while at the same time slashing both the cost and Health, Safety, and Environmental (HSE) risks of operations.”

METIS relies on Downfall Air Receiver Technology (DART) recorders, which can be fixed into soft ground in upright positions in order to transmit data via high-speed real time radio telemetry systems to centrally located intermediate antenna towers. Data from these DART arrays will be collated and sent directly to base camps located a significant distance away.

While installing these DARTs would ordinarily require arduous labor, METIS employs fleets of autonomous drones which are able to conduct a multi-physics safety clearance check before releasing the DARTs over prearranged, optimal positions. This new data acquisition method is known as ‘carpet recording’.

In each fleet, a remote-controlled leader drone is tasked with scanning the environment using Lidar and Infrared sensors in order to detect life forms and other potential obstructions. This is intended to enable the safe and environmentally responsible use of the carpet recording method. 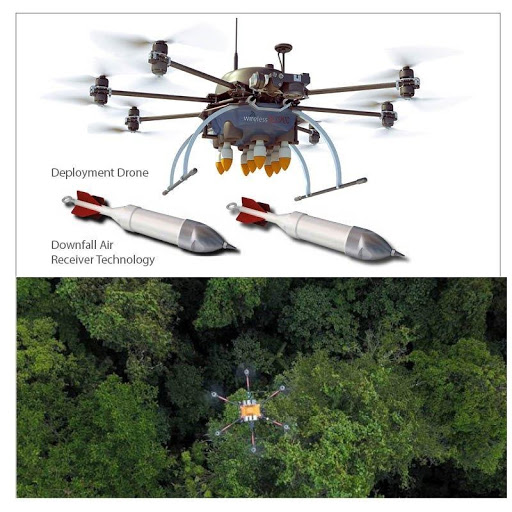 Should no obstructions be detected, the autonomous DART carrier drones will drop the DARTs from above the canopy, enabling them to impale themselves vertically in the soft ground below, and begin transmitting relevant seismic data. Drones can subsequently be tasked with filling in gaps in the array by dropping further DARTs, should surveyors later find that coverage is insufficient.

The METIS system was trialed in Papua New Guinea, which contains promising hydrocarbon deposits that are often located in remote areas, and which are difficult to access and survey using traditional methods.

Reflecting on the challenges the terrain presented, Pierre-Olivier Lys describes Papua New Guinea’s combination of uneven terrain and dense vegetation as “some of the most challenging terrain for seismic exploration in the world.”

During METIS’s pilot test in Papua New Guinea, approximately 60 DARTs were deployed in only a few hours using a single autonomous drone, and they immediately began transmitting seismic data after being dropped – proving the utility of the concept. Fully equipped drone fleets will, in the near future, be able to safely deploy up to 400 sensors per square kilometer.

The METIS project’s use of autonomous drones effectively replaces dangerous and environmentally damaging human labor, addressing two major challenges of hydrocarbon exploration at once. Real-time processing and rapid-subsurface image delivery will furthermore allow surveyors to more quickly assess the quality of data acquired, while empowering them to modify their data gathering plans on the fly, based on the information they gather.

This would allow for extremely rapid assessments of an area’s potential in terms of hydrocarbon extraction, shortening the length of time necessary for allocation to surveying work and allowing extraction to commence sooner.

A major factor informing the METIS project’s progress has been the reduction of its environmental footprint.

For example, the use of AI-powered autonomous drone systems allows for the deployment of DARTS from above the tree line, reducing the need to clear forests and interfere with extant ecosystems. The DARTs themselves are also made from biodegradable materials. Their bodies are made from polyactic acid, which is a type of biodegradable plastic.

Research teams have also ensured that almost every component of the DARTs will have a negligible environmental footprint, due to the use of advanced printed and hybrid electronics and biopolymers.

Furthermore, command-and-control processes for the METIS project are directed from multi-purpose inflatable airships called Flying Whales, which transport all equipment for sourcing seismic data, along with any materials required to set up camps in the survey area.

Once operations are concluded, autonomous drones will be tasked with seeding camp areas with seeds from indigenous plant-life in order to fully decommission these areas and preserve the local ecosystem.

The fact that mitigation measures are specifically included at every step of the development and deployment process to avoid impacting the environment shows that AI can be more than just an efficiency tool. It can also help contribute to more sustainable business practices.

Overall, the existence of METIS and its proven viability as a seismic data gathering platform are a promising indication of AI’s ability to reduce risks to humans and impact on the environment, while improving accessibility to isolated and inhospitable parts of the world.